When I tell people I am a hypnotherapist in London, it’s quite common for people to ask me for some advice. And one thing that they frequently want to know about is anxiety, which is a serious concern when it leads to panic attacks.

Here are my three top tips to deal with panic attacks.

It sounds slightly crazy and I’m certainly not suggesting you try and do this for a 60 seconds; just 10 or 15 seconds can help. What’s happening is that you’re helping to put some carbon dioxide back into your blood, because when people breathe rapidly during a panic attack they over-oxygenate their blood. It’s why people used to breathe into a paper bag when they were having an anxiety attack, but holding your breath is more common now because no one ever has a paper bag any more! 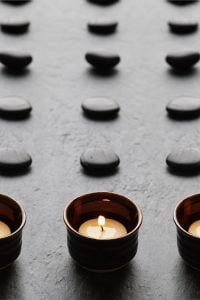 Experts in this field have worked out an algorithm whereby if you tap under your eye, then under your armpit and then under your collarbone six times each it will help a lot of people deal with their panic attack. As to why it works, the answer’s pretty complex but on one level it provides distraction from whatever it is that is occupying your mind. Physical distractions like this can be really good for people who suffer from anxiety, because they provide something else to focus on. If you tell someone not to think about a green elephant, they’ll find it impossible not to do so – likewise when you’re trying to tell yourself to stop thinking there’s a problem with the plane/that there’s a bomb on the train or that everyone at work thinks you’re a fool, it can be tricky to stop that line of thought. TFT tapping offers a way to focus your attention on something else, but there’s a lot more to it than that, including references to ancient Chinese philosophy and key meridian/acupressure points in the body. TFT can help the body to detune its normal response to panic attacks, and while not everyone’s convinced it works, there are people who swear by it. It’s all about finding what works for you.

Sceptics often don’t think this technique could possibly work, but there are lots of case studies that say that it can, and we’ve seen evidence of the Havening touch work on countless occasions. It’s something I regularly use during hypnotherapy in London, in fact. There are two parts to it: the first is to identify which emotion you want to get rid of, such as fear or anxiety or anger. To get rid of it, think of a stressful moment and then repeat the word while simultaneously stroking either the side of the face or your own arms (cross your arms and stroke from the shoulder downwards). Do this at one-second intervals and repeat for anything up to a couple of minutes. This usually “numbs” the feeling; stop when you feel that the emotion has dissipated. Next, repeat the process, but with a happy memory and focus on the emotion that you do want to feel: calm, or strong, for example. It’s a way to delink the content of a bad memory from the memory itself and can be a permanent cure.