Havening is a technique that is is growing in popularity because it is so effective at helping people to get rid of negative emotions and to replace them with positive ones. It seems an astonishingly simple technique on the surface, so much so that some people who have been to see me for hypnotherapy in London wonder if it’s all too good to be true. But I have used Havening on dozens of clients and I think their testimonials speak volumes. 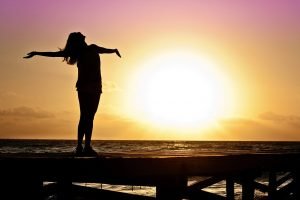 All of the techniques basically involve stroking parts of your body at a rate of one stroke per second – you’ll find more details of the techniques if you search online, but the most commonly used method is to rub your arms (left hand rubbing right arm, right hand rubbing left) simultaneously, with downward strokes. You can do this at home. The first thing to do is to identify whatever negative emotion is holding you back. It could be fear; it could be anxiety. Perhaps it’s feelings of sadness, anger or jealousy. Think about and identify that feeling within your body, and then apply the Havening touch while repeating the negative emotion out loud. In a way, you’re almost “casting it out” as you’re saying it.

I know it sounds slightly bizarre, but it works, and I will explain what it does in a minute. Just repeat the Havening move, saying the word out loud, for anything up to a couple of minutes, by which point the feeling will have dissipated.

Once you’ve got rid of the negative emotions you can start Havening the happy and positive emotions that you do want to feel. It’s exactly the same process, only now you’re “drawing in” the feelings that you do want. It’s important to do it in the right order: you wouldn’t build a house without making sure you had solid foundations. Repeat the Havening movement and say out loud the emotion you want to feel: “confident” or “dynamic” or “fun-loving” or “calm”: whatever it is that you feel is missing. Whether you use Havening for confidence, for helping to get rid of anxiety, or even using Havening for weight loss, it can be a big help.

A few minutes per day

We all brush our teeth a couple of times a day for two minutes, but most people don’t spend even a second in their head thinking about what they want to be or what’s going wrong in their life. The Havening technique will only take as long as it takes to brush your teeth – and it will have a profound effect on how you feel. I recommend to clients who visit me that they do it first thing in the morning, last thing at night and whenever it is needed in the day.

So why does it work? Well the hypothesis – it’s a theory at the moment and is going though clinical trials – is that by applying touch, it releases dopamine and serotonin into the body, which makes us feel good. It’s known as a psycho-sensory therapy because of this touch aspect. It’s one of those things that science doesn’t fully understand how it works, but we know that it does.

There’s also a theory that changing your physical state will change your emotional state: social psychologist Amy Cuddy has done some research into this and there’s a great TED talk of hers where she explains how she looked at the chemical composition of saliva in people who were anxious. She then had them change their physical state – she actually had them stand up and wave their arms angrily. When she looked at the chemical composition of their saliva samples now, they had changed. It’s a natural phenomenon that hypnotherapists are able to exploit.

Doing it with a hypnotherapist can make it all feel a little less hokey. Believe me, I know how strange it can feel the first time you sit on the edge of a bed, rubbing your arms and saying, “Calm”. Clients tell me that no matter how skeptical they are, when they come to see me at my hypnotherapy practice in London, it works.