Thanks to tube strikes, work pressures, traffic and the general hustle and bustle of city life, London can be pretty stressful for the up to 25 percent of people who already struggle with anxiety. In fact, figures released by the Mayor’s office in 2014 showed that anxiety levels in London were certainly higher than the UK as a whole. 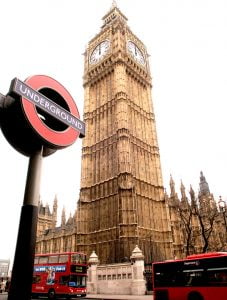 We were sadly reminded of another facet of London life just recently with the tragic terrorist attack on Westminster in March.

Because I practise hypnotherapy in London, I am acutely aware of the kind of things that happen in the city that typically make people anxious. And I would say that a general terror threat is certainly one of them. The words last year of London Mayor Sadiq Khan – so unceremoniously brought up in the wake of the latest terrorist attack – probably do little to help.

If you are already anxious about the threat of terrorism, then hearing that attacks are “part and parcel of living in a big city” could easily lead to feelings of impending peril. In fact, if you tell someone who is already anxious that an attack is likely, then I think there’s a very good chance that people will create their own heightened terror threat in their head.

What this means on the journey into work is that their body will be constantly adrenalized and alert for signs of an attack – this is involuntary and is done so that they would be ready to react if something did happen. While statistically they may be very unlikely to be involved in an attack, every police siren, every sudden jerky movement or unexpected stop on the tube will lead to a surge in anxiety.

Cortisol will flood through their veins, boosting blood sugar so that people will be ready for the imminent emergency. The net effect when this happens repeatedly and the threat amounts to nothing, though, is long-term stress, which can lead to an abundance of medical problems.

It’s difficult. Modern city life is perhaps not for the faint-hearted. When I was traveling to my hypnotherapy practise in London last week the huge police presence only added to the message that the city and terrorism had become inextricably linked.

The body is both massively complex and almost hopelessly simple at the same time: all you are doing when you are feeling symptoms of anxiety is priming the body to respond in the best way that thousands of years of evolution have taught us how: to fight the problem head on or to run away.

It’s a problem, however, because that the anxiety we feel usually doesn’t warrant such a dramatic response. When cavemen felt the breath of a mammoth on their neck, the fight or flight response was totally warranted. When you feel a similar response whenever you see someone wearing a backpack on the tube, it’s not.

There are some quite simple ways to try and recondition this response, and they can be very effective, especially if you commit to long-term practise. For a more rapid, premium solution, a visit to a hypnotherapist in London could be worth considering.