My heart went out to singer Ed Sheeran recently when I read about his struggles with panic attacks. It appears that he is living proof of the downside of fame, and the sad truth is that he is by no means the only celebrity to need help for anxiety.

Sheeran told The Guardian that one of his worst moments of his life happened on an EasyJet flight from Benidorm to London. He was travelling alone, without any semblance of the traditional entourage that most international stars surround themselves with. 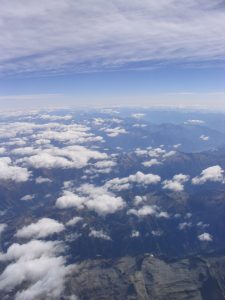 The problem, he said, was a group of drunken British tourists, who ribbed him for two long hours. “It was horrendous,” he said. “The worst experience of my life. Like so bad that I started getting panic attacks. I get really claustrophobic. I just don’t like groups of people that I don’t know any more.”

What the singer is describing is the “trigger” event that has led to all subsequent panics attacks. Anxiety affects up to 25 percent of the population, and while it is quite manageable for many people, in others it can result in a panic attack. Panic attacks usually lead to a whole host of unpleasant physical symptoms – the dictionary describes it as “a sudden overwhelming feeling of acute and disabling anxiety.”

Symptoms include sweating, trembling, palpitations and a shortness of breath. Hypnotherapy for panic attacks can really help, although there are a number of self-help techniques that can give some comfort, too – more of which in a moment.

Sheeran’s trigger event means that he is in prime panic attack territory whenever he is with a group of strangers in a confined space. In other words, whenever that happens he is catapulted back to that deeply unpleasant moment on which he was travelling back from Spain. His mind puts him back in his airline seat, with all those drunken, leering holidaymakers making fun of him. His body reacts accordingly.

Everyone who has panic attacks has a trigger event like Sheeran’s. If you have a fear of dogs, there will be an incident somewhere in your past that made you associate dogs with danger. Anyone who gets anxious about speaking in front of crowds will have something – an earlier speaking engagement or perhaps even a humiliating moment standing up in front of the class at school – which “tricks” the body into responding like it did when the memory was created.

We make connections between what’s happening now and what happened in the past and we react. And it’s natural! The body knows you suffered in the past in a certain situation, and is basically priming you to run away (or fight – it’s the famous ‘fight or flight’ response at play here) so that you don’t get bruised again.

Hypnotherapy for anxiety takes a multi-pronged approach, and can get to the heart of the problem by helping people to divorce their responses to whatever triggers are deep-rooted in their mind. In some cases, it is necessary to “remove” the trigger itself, which can also be done.

Sheeran would likely benefit greatly from a visit to a hypnotherapist, and he is totally typical of a client that I would see at my hypnotherapy practise in London. His concerns are eminently resolvable, and using techniques such as Havening he could get to the point where crowds of strangers are no longer stress-inducing.

If you want to try and learn a few techniques at home, the following can help to diffuse a panic attack the next time one strikes:

I have written another blog with more tips; for advice about hypnotherapy in London, please contact us.