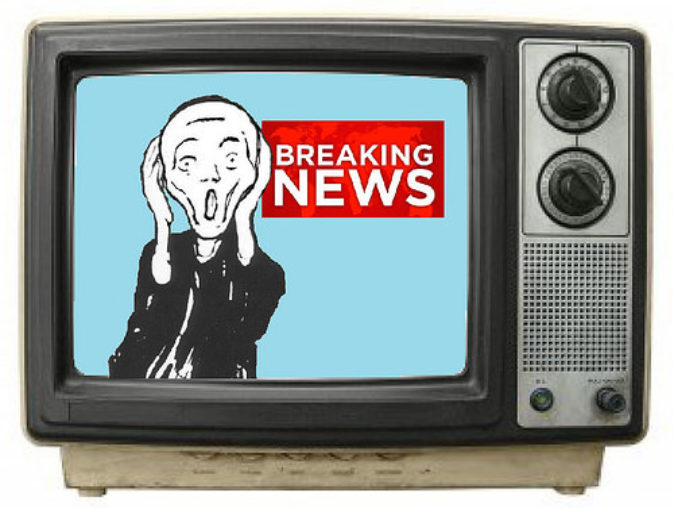 The other day I caught myself realising that the first thing I was doing when I woke up was giving myself a COVID hit of anxiety.   And it is was one I topping up throughout the day.   Twitter, all the news updates, you name it, I was all over it.   I realised I was anxious and stressed.

In this post, I wanted to address how we process bad news and why an over-reliance on it can be really bad for us. The good news (if you’ll pardon the pun) is that all it takes is a few tweaks to our daily lives for us to be rid of it.  The newspapers and news sites are literally brimming with bad news – to the point where it seems that the only news in the world is related to the coronavirus.

And yet, logic suggests that this can’t possibly be true.

Scientists must still be working on cures for a whole host of diseases.  Detectives are solving crimes, novelists are finishing books, and people are being kind to each other in a multitude of ways.

Focusing on the positives is a great way for anyone to improve their mental wellbeing, but to get there, I want to focus on the negatives first (bear with me!).

1. If you start the day with bad news, it can affect your mood all day

You wake up, you turn on the news, you read gloomy headlines. If that’s your current routine – and so many of us are rolling out of bed right now and catching the headlines on our phones before we’ve even brushed our teeth – you’re not doing yourself any favours.

According to a study reported on in the Harvard Business Review, people who were shown negative news in the morning were 27 per cent more likely to say their day was going badly six-to-eight hours later when compared to those who had been shown positive news.

2.  The news we’re consuming is generally getting gloomier anyway

Even before the corona-you-know-what the news in general had steadily become more focused on bad news over the past few decades.

A few years ago, a data scientist named Kalev Leetaru devised a system to check every article printed in various media over a prolonged period and found that a gloomier outlook had been portrayed since the 1970s.

In an article in the Guardian, it was noted that Donald Trump had been one beneficiary of this kind of journalistic negativity.

They quoted New York Times writers David Bornstein and Tina Rosenberg who said: “For decades, journalism’s steady focus on problems and seemingly incurable pathologies was preparing the soil that allowed Trump’s seeds of discontent and despair to take root.

One consequence is that many Americans today have difficulty imagining, valuing or even believing in the promise of incremental system change, which leads to a greater appetite for revolutionary, smash-the-machine change.”

3. Bad news takes root in the brain – even if it’s wrong

In an article about the way we absorb information on the fastcompany website, a political scientist named Brendan Nyhan was quoted as saying: “Once factually inaccurate ideas take hold in people’s minds there are no reliable strategies to dislodge them.”

This is hardly surprising – it’s one of the things that made Facebook and its ‘echo chamber’ such a contentious hot topic over the past few years. If you stumble over an article that says ‘zebra stripes are painted on’ you’ll likely then find another – and another.

Go down the ‘bad news’ rabbit hole, and you’ll keep branching off into ever more tunnels of despair.

4. Your feelings of helplessness can lead to depression

When reading about global news, people often come away from the experience feeling there’s nothing they can do to change it. They have no influence in this world of horrors, and this – according to findings in the Journal of Abnormal Psychology – can lead to something known as “learned helplessness.”

In one study, researchers found that people who follow this path are more likely to become depressed.

…And no one wants to be addicted to anything if they can help it. A scientist in Sydney has developed something called the excitation-transfer theory, which suggests that any intense emotion – good or bad – can ‘excite’ the nervous system.

She told Australia’s Body and Soul website: “The excitation-transfer theory suggests that an intense emotion – even if it’s disgust or shock – can excite our nervous system, which our body interprets as a reward, irrespective of what emotion created the excitement.”

She also points out something which I’ve covered before: that we’re neurologically programmed to scan our environment for scary things. “Following negative news articles serves our self-preservation purpose,” said the scientist. In other words, to save our own backsides we want to know what’s going on “out there”.

The problem is, you often can’t fix the problem, and being hyper-informed about everything won’t actually do you any good. Even trained experts who know how to handle a crisis sometimes struggle with information overload.

In his book The Art Of Thinking Clearly, Swiss writer Rolf Dobelli points out that if you consume around 10,000 news stories per year, as most of us apparently do, you’d struggle to pick even one at the end of this period that actually helped you make an important decision.

He says that media organisations – who sell the news (and the ads they support) to you – want you to feel that more news gives you a competitive advantage, when it doesn’t. “The less news you consume, the bigger advantage you have,” he says.

News good or bad eats your time. It’s something else that Dobelli picked up on: he states that if you read a newspaper for 15 minutes three times a day and add in several more five-minute interludes, you can easily lose half a day per week.

At the moment, with many people working from home (if they’re able to work at all), that half day could easily become a full day of news consumption per week. Even two.

If you were to say, “No more!” and find something more constructive, you could make your life infinitely more rewarding. Learning the guitar, for example, takes around 150 hours to get to a basic level where you can play a handful of songs pretty competently.

More encouraging still, Josh Kaufman, author of The Personal MBA, reckons it takes about 20 hours from knowing nothing about something to being pretty good at it.

Back in the day, it was relatively hard for a media outlet to really put people in the picture – a photo of whatever disaster was being written about would often have to suffice. Today’s rich media content has changed the landscape for the worse.

Graham Davey, a professor emeritus of psychology at Sussex University and editor-in-chief of the Journal of Experimental Psychopathology, says that today’s news is increasingly visual and shocking (think endless audio and video clips on your smartphone) and that these changes to the media we consume, “have often been detrimental to general mental health.”

His study found that they can lead to sleeping problems, mood swings and even PTSD.

One problem with bad news is that you might not intentionally be looking for it. You still get to see it, though, as it is so hard to escape, and that’s because people like to share it.

When you go into Facebook, you’ll likely be bombarded with links to news stories in your feed, many of them negative. It’s one of many reasons why overdoing it on social media can wreak havoc with people’s lives.

My advice would be to use social media sparingly, and to quickly snooze or unfriend those who regularly post controversial or distressing content. Who needs people like this in their lives?

It’s clear from numerous studies that reading bad news can cause stress – and in countless other studies it has been proven how stress can manifest itself in any number of ways.

Among these are headaches, muscle pains and a multitude of autoimmune diseases such as alopecia areata, MS and psoriasis.

That’s a pretty sobering thought, don’t you think? Why on earth would you keep force-feeding yourself if bad news can make you physically ill?

Getting to a better place

You don’t need to by a PhD student to see that reading bad news isn’t likely to be a smart thing to do for most people. It steals your time, it’s potentially making you stressed out and ill, it can ruin your day and can lead to depression.

We all have the power to change our daily behaviour, though, and with the right mindset you, too, can reduce your news consumption and start living a fuller life.

That all sounds very grandiose. I suppose the best thing I did was stop watching the news from the first thing in the morning and limit my exposure to it.   It’s not that I’m now less aware, though I am less anxious